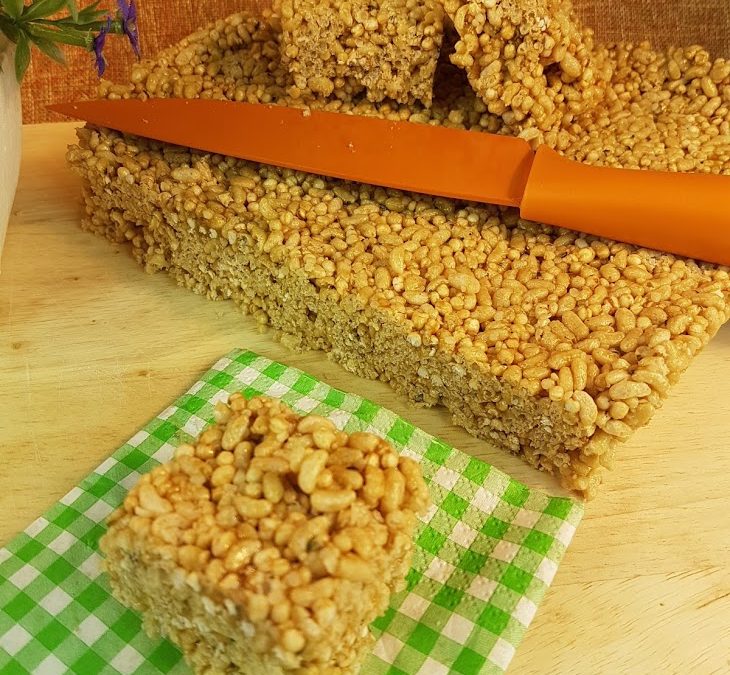 Made without marshmallows or butter, these delectable, no bake squares pack just the right amount of crunch to satisfy everyone.  Healthy, gluten free, dairy free and absolutely kid-friendly!

For these bars, I ended up using both maple and yacon syrup. I wanted to use JUST maple syrup since I think it’s a more common ingredient and therefore easier to find, but unfortunately the bars didn’t hold up with just maple syrup alone. So, yacon syrup to the rescue!  I guess you could probably substitute brown rice syrup too.

What is yacon syrup you ask?  Yacon (also known as the Peruvian ground apple) is a juicy, edible tuber that has been eaten by people in the Andes for thousands of years. Yacon Syrup is a delicious, healthy sweetener derived from this nutritious tuber. Due to its low GI and low calories, it is an ideal sweetener for diabetics and those watching their weight.

Thank you to EcoIdeas for the sample of Raw Cashew Butter which worked beautifully in this recipe.  The cashew butter is smooth and lends a creamy texture and dense nutritional value to this recipe.

Prepare an 8 inch by 8 inch square pan, by lining it with parchment paper.

In a large bowl add rice cereal, quinoa puffs and hemp seeds.  Sitr cashew butter mixture into cereal and combine until all the cereal has been coated.

Press into prepared pan and spread out evenly. Press down with lightly wet fingers or roll flat with pastry roller.

Slice into squares and serve.