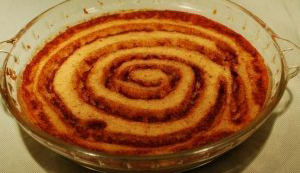 A combination of pancakes and cinnamon bun…yum!

Grease and flour a pie plate or line with parchment paper.

In a medium bowl, add milk, oil, agave syrup and egg or egg substitute. Sift in flour, baking powder and salt just until batter is moistened.

In a small bowl, make the cinnamon filling by mixing coconut oil, sugar and cinnamon.

Scoop the filling into a small piping bag.

Pipe the cinnamon filling in a spiral over the pancake batter.

Serve with toasted pecans and any remaining cinnamon filling.